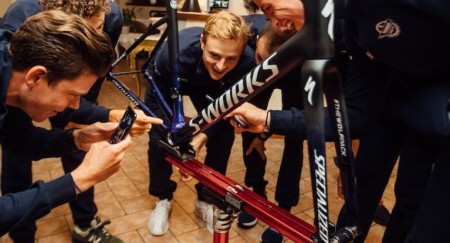 Specialized have been providing world-beating equipment to the Deceuninck-QuickStep team, in its various guises, for 11 years now. Over that time we’ve enjoyed some great success together and this season has been no different. With an incredible 66 victories (and counting…) in some of the most iconic races in the world, this year has been nothing short of incredible.

To celebrate the season and honour the team, Specialized are making a limited edition Tarmac Disc frameset, with every win and every rider celebrated in a stunning paint job. Only 200 of these gorgeous S-Works framesets are being made, individually numbered and available now for pre-order from one of our stores. For the record, there are only 199 left – frame number one was presented to the team at Il Lombardia and is destined to take pride of place at the Deceuninck-QuickStep service course in Belgium.

A year atop the podium

66 victories is kind of a ridiculous amount when you dig into the details. The team hasn’t taken its foot off the gas all year, starting with a bang beneath the blazing Australian sun in January with Elia Viviani’s stage one victory at the Tour Down Under, his first race in Deceuninck colours no less. Next came stage wins in Colombia and Portugal, the Belgian bonanza of Omloop Het Nieuwsblad, Kuurne–Brussels–Kuurne and Le Samyn in the first week of March, all the way up to a few weeks ago when Álvaro Hodeg threw his arms in the air at the Münsterland Giro. We’re calling it – this is the year of the #TheWolfpack.

And who can forget those 14 magical days in June? Julian Alaphilippe, ‘Loulou’ to his adoring French fans, lit the touch paper on the third stage of the Tour de France and was setting off fireworks right up until the last weekend. His time trial victory on stage 13 will live long in the memory – almost 35 years of local passion came bursting out of the bottle as he stormed up the final climb in Pau, allowing even the most jaded Frenchman to dream. He couldn’t really do it, could he?

Ultimately he came up short, but not before re-igniting the hope that a Frenchman could win the Grande Boucle someday soon. The 2020 Tour route has just been announced, and if anyone has the ability to blow the race to pieces it’s our Loulou.

A year in numbers

Let’s take a closer look at the year in numbers. 15 of the team’s roster of 25 riders stood on the top step this year, from the young superstar Remco Evenepoel right through to the elder statesmen Zdeněk Štybar and Philippe Gilbert, and would you believe it, their stagiaire (trainee) Jannik Steimle too. In the bank are seven Grand Tour stage victories, two Monuments and scores of others besides.

31 victories came on the Venge, 29 on the Tarmac, five on the Shiv TT bike and one on the Roubaix. From the sprinters to the hardmen, the rouleurs to the mountain goats, Deceuninck-QuickStep have pushed themselves and their Specialized bikes to greater and greater heights. It’s a remarkable record.

The Tarmac Disc was the chosen model for this limited edition bike, and for good reason. No bike in the peloton is more well rounded than the Tarmac Disc, capable of eating up the kilometres, soaring over the mountains and mixing it up when the racing gets frantic. If you were to bottle the Wolfpack mentality and turn it into a bike, you’d end up with the Tarmac Disc.

As a frameset, this remarkable design gives you the opportunity to build your dream bike. Grab a coffee, start browsing for the right components and with our help you can create a bike tailored to you. Painted in the team’s blue and black livery with every win and every rider’s name incorporated in the design, you’ll instantly become part of the pack. If you ever find yourself flagging on a long ride, a quick glance down will put some fire in your legs, that’s for sure.